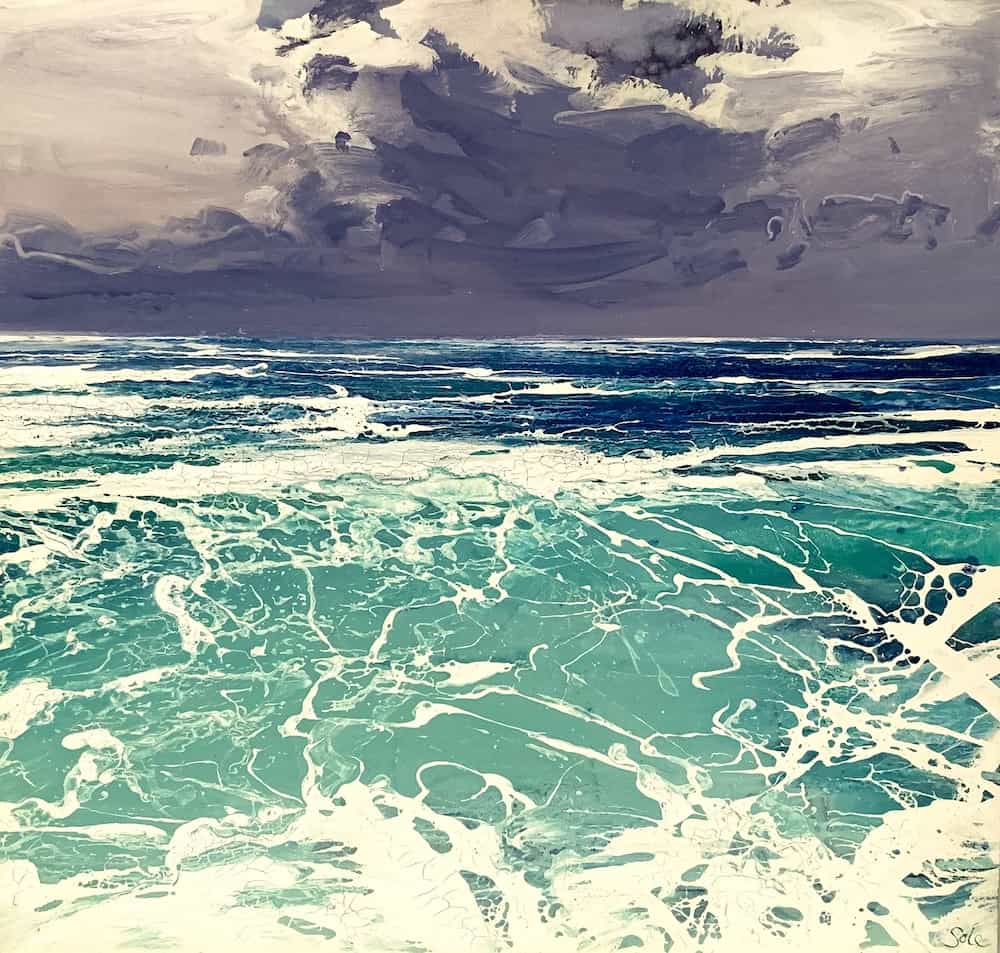 In this exhibition a curated selection of Michael Sole’s (b. England 1985) most dramatic storm sceneries are presented, taken from locations and out of moments which form the base for Sole’s inspiration and passion, and which represents the artist’s perception that, in painting, energy must be met with energy. Powerful natural forces should be recreated though an energetic and confident painting technique.

In Cornwall Rocks no.2 Sole has, by using studio brooms to imitate a rolling wave and tilting the canvas as the paint is drying to replicate a receding wave, created a motif full of movement and nuances, both in colour and atmosphere;

“I wanted to capture the subtle changes of the colour on the coast of Cornwall in this painting and the blur of the line between where the sky meets the sea. The horizon. With most of my work I struggle to be spontaneous and to use as few a gesture as I can get away with. The broom was a move of frustration, one which worked, this time, in my favour.”

In the March Gale series, a spring storm which raged in March on the south coast of France is depicted.
For this painting series Sole relied on his artistic movement ’Involuntaryism’ where the artist ‘allows’ the characteristics of the materials to themselves create the paintings, partly through gravity, and partly through the divergence which arise when the oil paint and acrylic meets on the canvas. In this technique Sole builds the paintings through layer upon layer of paint to resemble the layers of the sky and to give the motifs depth;

“These paintings are a series of works focusing on skies, the depth and the layering effects in our atmosphere, but also looking at the abstract nature the sea has. This year I feel myself naturally moving toward abstraction, wanting to produce work which is moving away from the image, so that the materials and the processes take on much more of an important role enabling me to become freer with the paint, not trying to replicate a particular image but to just grasp an idea of that place, and how I felt and remembered it.”

“I am very happy with the gradient of colours in this piece and its spontaneity. The white in these pieces is applied by spraying the paint over the wet oil and also sweeping the brush across to show the movement of the wind on the water.”
Show me March Gale no.14, March Gale no.15, and March Gale no.17

In Storm on the Riviera no.8, the artist has found inspiration in the colours and contrasts of light between the dark stormy sky and a sunlit sea;

“With these paintings I am very excited as I can be as crazy as I like on the sea, using my normal techniques, because as soon as that dark purple of the sky is added our minds instantly detect the foreground as the sea. This series is my most abstract representations of the sea. Relying on the colours to tell the story and subject.”
Show me Storm on the Riviera no.8

Michael Sole holds a BA in Fine Arts from Wimbledon College in London. He has partaken in exhibitions and fairs around England, France, USA, Hong Kong and Singapore, amongst them solo exhibitions at The Mall Galleries in London, England (2017), Yeelen Gallery in Miami, USA (2014), and Les Vieux Murs in Antibes, France (2010). Sole also holds winning and finalist titles from prestigious awards such as the Global Art Awards, National Open Art Award, Cill Railag residency award and Dorset Landscape Painter of the Year (2017), Sherfield Open Exhibitions (2016), ‘The Arts Club Charitable Trust Award’ from the Royal Society of Marine Artists’ (2013) and ‘Young Artist of the Year’ from the Royal Society of Marine Artists (2010 and 2009).